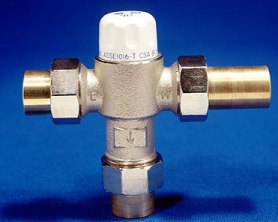 Don’t you hate it when you are in the shower and someone else in the house flushes a toilet and you get burned by hot water? I do test water temperature when I do a home inspection, but sometimes these fluctuations don’t show up until later.  So let’s talk a little about anti-scald valves.  Anti-scald valves, also known as tempering valves and mixing valves, mix cold water in with outgoing hot water so that the hot water that leaves a fixture is not hot enough to scald a person.

Unwanted temperature fluctuations are an annoyance and a safety hazard. When a toilet is flushed, for instance, cold water flows into the toilet’s tank and lowers the pressure in the cold-water pipes. If someone is taking a shower, they will suddenly feel the water become hotter as less cold water is available to the shower valve. By the same principle, the shower water will become colder when someone in the house uses the hot-water faucet. This condition is exacerbated by plumbing that’s clogged, narrow, or installed in showers equipped with low-flow or multiple showerheads. A sudden burst of hot water can cause serious burns, particularly in young children, who have thinner skin than adults. Also, a startling thermal shock – hot or cold – may cause a person to fall in the shower as he or she scrambles on the slippery surface to adjust the water temperature. The elderly and physically challenged are at particular risk.

Anti-scald valves mitigate this danger by maintaining water temperature at a safe level, even as pressures fluctuate in water supply lines. They look similar to ordinary shower and tub valves and are equipped with a special diaphragm or piston mechanism that immediately balances the pressure of the hot- and cold-water inputs, limiting one or the other to keep the temperature within a range of several degrees. As a side effect, the use of an anti-scald valve increases the amount of available hot water, as it is drawn more slowly from the water heater. Inspectors and homeowners may want to check with the authority having jurisdiction (AHJ) to see if these safety measures are required in new construction in their area.

Installation of anti-scald valves is typically simple and inexpensive. Most models are installed in the hot-water line and require a cold-water feed. They also require a swing check valve on the cold-water feed line to prevent hot water from entering the cold-water system. They may be installed at the water heater to safeguard the plumbing for the whole building, or only at specific fixtures.

The actual temperature of the water that comes out of the fixture may be somewhat different than the target temperature set on the anti-scald valve. Such irregularities may be due to long, uninsulated plumbing lines or defects in the valve itself. Users may fine-tune the valve with a rotating mechanism that will allow the water to become hotter or colder, depending on which way it’s turned. Homeowners may contact an InterNACHI inspector (like me) or a qualified plumber if they have further questions or concerns.

In summary, anti-scald valves are used to reduce water temperature fluctuations that may otherwise inconvenience or harm unsuspecting building occupants.

As a home inspector in Arizona, I inspect the gutters and downspouts as part of the roof portion of the home inspection.  Yes, it does rain here in Prescott and Scottsdale! Some important factors a home seller and buyer should consider include: that the guttering system is adequately sized to prevent runoff; that the gutters…

END_OF_DOCUMENT_TOKEN_TO_BE_REPLACED

Jerry Spicer has over 30 years of experience in custom home building and home inspections of over 4000 properties ranging in size from 1,500 to 16,000 livable square feet. Jerry has built and inspected homes in Scottsdale, Phoenix and Prescott Valley.

He's on a mission to help every property owner feel happy and content by providing you a thorough quality home inspection or it's free. (YES, It's FREE! I Guarantee it.) 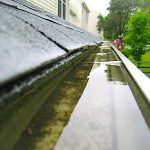 As a home inspector in Arizona, I inspect the gutters and downspouts as part of the roof portion of the home inspection.  Yes, it does rain here in Prescott and Scottsdale! Some important factors a home seller and buyer should consider include: that the guttering system is adequately sized to prevent runoff; that the gutters…